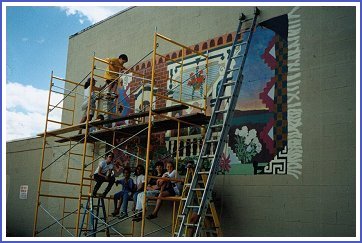 The Mentoring Program helps kids create positive connections in the community. Through the mural projects, youth learned much about history of the area; become more familiar with important institutions, including the Saratoga Springs Public Library, The Arts Center, and Skidmore College; learned lessons in painting, architecture, and science. Youth have been challenged physically as well as technically – while they climbed scaffolding to create their works of art.

Importantly, both while preparing for these projects and while painting, the youth met building owners, business people, and professionals who work nearby the mural sites. They also met respected members of civic groups who assisted with the projects. Positive exposure to positive role models has been beneficial to the youth.

The murals are constant reminders to the kids, their families, and the community that youth can contribute in creative and meaningful ways to their community. The kids’ feelings of self-worth and accomplishment has been much enhanced by participation in these projects.

These mural projects were funded, in part, by Decentralization, a regrant program of the New York State Council on the Arts, administered by the Saratoga County Arts Council. Support was also provided by Skidmore College, the Society for the Preservation of the Underground Railroad, The Children’s Museum at Saratoga, and several other institutions.